It wasn’t until Japan attacked Pearl Harbor that the United States was prompted to enter World War II. But what actually happened on December 7, 1941?

Use this interactive in your classroom to start a conversation with your students about how the events at Pearl Harbor startled Americans and drove President Franklin Delano Roosevelt to ask Congress for a declaration of war with Japan. 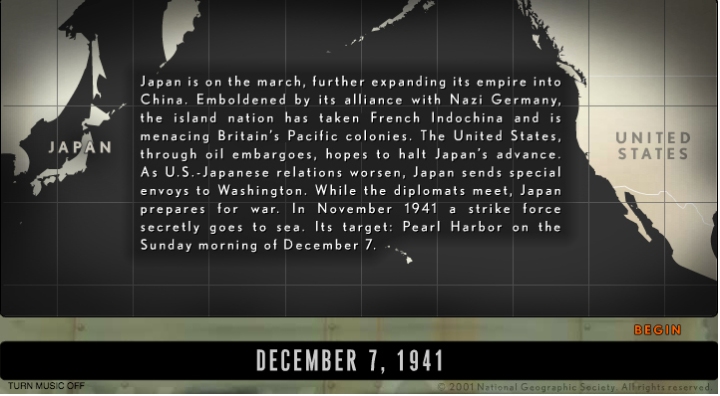 This interactive can be used as a presentation, or your students can work through it on their own or in small groups. The Attack Map features a timeline that contains detailed stories and firsthand accounts at each marker. Follow the stories of American and Japanese service members as they explain what they were thinking and doing throughout the day on December 7, 1941.

What did your students already know about the attack on Pearl Harbor and U.S. involvement in World War II? Did they learn anything new by using the interactive? How does an Attack Map timeline and hearing firsthand accounts from those who were there improve your students’ understanding of this event in history?

Using an interactive like this one can add great context to a topic that may be glossed over quickly in a textbook. Taking some time to help your students uncover perspectives and facts is a great way to get them to think critically about events and issues in our past, present, and future.

Check out our Teachers’ Toolkit below for more resources about Pearl Harbor and World War II.

Article: Date Which Will Live in Infamy

Study Guide: How (Almost) Everyone Failed to Prepare for Pearl Harbor

One thought on “Weekly Warm Up: Use This Attack Map to Remember the Tragedy at Pearl Harbor”

This site uses Akismet to reduce spam. Learn how your comment data is processed.