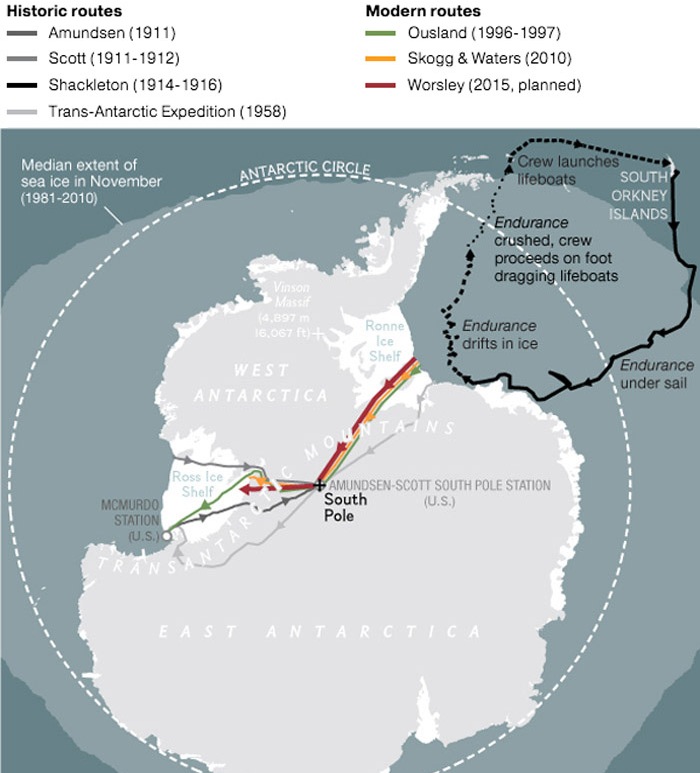 GEOGRAPHY Explorer Henry Worsley died as he tried to cross Antarctica unaided. (BBC) Use our high-resolution map—packed with info about expeditions, stations, wildlife, climate, and more—to better understand the world’s most unexplored continent. Teachers, scroll down for a quick list of key resources in our Teachers’ Toolkit. Discussion Ideas Take a look at the Nat Geo map above. Why do you think so many Antarctic … END_OF_DOCUMENT_TOKEN_TO_BE_REPLACED

SCIENCE A dead blue whale washed up on the shore of a small fishing town in Newfoundland last week. A bloated, beached, blubbery bomb of a blue whale. As of Thursday morning, the carcass is still intact, but onlookers are worried that it might soon explode. Literally. (The Atlantic) Use our resources to learn more about the life and death of blue whales.   Discussion … END_OF_DOCUMENT_TOKEN_TO_BE_REPLACED

ENVIRONMENT Recently, a 12-year-old boy was snatched and his friend mauled by a saltwater crocodile in northern Australia. Thirteen people, six of them children, have reportedly been killed by saltwater crocodiles—salties, as they’re locally known—in the area over the past dozen years. (National Geographic News) Use our resources to better understand saltwater crocodiles, funnel-web spiders, great white sharks, and the rest of Australia’s dangerous fauna. … END_OF_DOCUMENT_TOKEN_TO_BE_REPLACED

ENVIRONMENT A kayaking fisherman was Hawaii’s second shark attack fatality this year, following an August attack on a snorkeler. Prior to 2013 there hadn’t been a single fatal shark attack in Hawaii since 2004. Are shark attacks on the rise? (National Geographic News) Use our resources to better understand sharks and their behavior. The species of shark responsible for the death of the fisherman has … END_OF_DOCUMENT_TOKEN_TO_BE_REPLACED

This past week, Australia has been the scene of raging brush fires that, at the time of this posting, have claimed nearly 200 lives (NPR). This number of deaths seems ludicrously high, and I have tried to mentally justify how something as simple as a brush fire could kill so many people. According to some scientists, reasons for the high death count include climate change and dwindling water resources. This is in contrast to my initial conclusions of poor emergency management and geographically isolated areas, which however, probably did exacerbate the problem.

This morning, Freya Matthews of Australia’s La Trobe University wrote in the Sydney Morning Herald that, “Saturday’s events showed us the terrifying face of climate change. The heat was devastating, even without the fire.” Matthews implies that fires such as the ones that barreled through Australia this weekend are now going to become commonplace. I can’t say that I disagree with her on this matter. Here in the United States, many climatologists and geographers have attributed the fury of Hurricane Katrina to rising oceanic temperatures. Similarly, if one takes the time to actively seek out environmental destruction stories (such as Australia’s brush fires or Hurricane Katrina, but perhaps much less publicized catastrophes like the expected extinction of salamanders), they will find that many of these disasters are theoretically caused by a rapidly changing climate.